The catalogue of errors and failings that ended in the sinking of a Royal Navy destroyer during the Falklands war has been disclosed after being covered up for 35 years.

Twenty people died and 26 were injured when HMS Sheffield was hit by an Argentinian Exocet missile during the early days of the 1982 conflict. It was the first Royal Navy warship to have been lost in combat since the second world war.

The report of the board of inquiry into the loss of the Sheffield, which has finally been declassified, reveals the full reasons why the ship was completely unprepared for the attack. 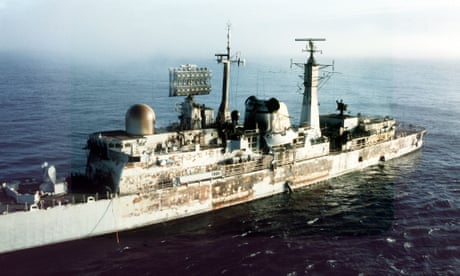 Exocet missile: how the sinking of HMS Sheffield made it famous

The board found that two officers were guilty of negligence, but they escaped courts martial and did not face disciplinary action, apparently in order to avoid undermining the euphoria that gripped much of the UK at the end of the war.

A heavily censored summary of the board’s findings was released by the Ministry of Defence in 2006, but the redaction concealed all the board’s key conclusions and criticisms, including the findings of negligence.

Also hidden was the board’s warning that there were “critical deficiencies” in the firefighting equipment then aboard type 42 destroyers such as the Sheffield.

The board of inquiry found the anti-air warfare officer’s mistake was based on his reading of an intelligence assessment of the Argentinian threat, which had arrived on board in “a sizeable and daunting bundle” of paper that was difficult to comprehend.

While the ship’s company were aware of the threat posed by Exocet missiles, some appear to have thought the Sheffield was beyond the range of the Super Étendard aircraft, because they were unaware the planes could refuel in mid-air.

The board also concluded it was “unfortunate” that the Sheffield’s captain, the submariner Sam Salt, and his second-in-command, a helicopter officer, had “little or no relevant recent surface ship experience”.

In the event, nobody called the captain. His ship did not go to “action stations”, did not fire off any clouds of chaff in an attempt to deflect the Exocet’s, and did not turn towards the incoming missiles in order to narrow the Sheffield’s profile. Moreover, some of the ship’s weapons were unloaded and unmanned, and no attempt was made to shoot down the incoming missiles.

The captain of HMS Sheffield, Sam Salt, on board the HMS Hermes after the loss of his ship

One of the Exocet’s slammed into the Sheffield’s starboard side about 8ft (2.4 metres) above the waterline, ripping a hole 4ft high and 15ft long. It penetrated as far as the ship’s galley, where eight cooks are thought to have been killed instantly. Fire erupted within seconds and the ship filled with smoke.

Twelve people were thought to have been overcome by fumes, including five who remained on duty in the Sheffield’s computer room until it was too late for them to attempt escape. Some of the wounded suffered serious burns.

The report says the firefighting efforts “lacked cohesion” and were “uncoordinated”, and that although the crew attempted to tackle the blazes, “it was not clear where the command of the ship was located”.

The main pipe through which water was pumped for firefighting had been ruptured, while several pumps failed and forward escape hatches were found to be too narrow for people wearing breathing apparatus. The ship’s company were unable to bring the blaze under control and Salt gave the order to abandon it.

The Guardian understands that at the time the board’s findings were suppressed, the British government was attempting to sell type 42 destroyers.

In London on the evening of the attack, 4 May 1982, the defence secretary, John Nott, told the Commons that the Argentinian fighter had probably flown in under the navy’s radar. The next day, the French manufacturer of the Exocets, Aérospatiale, issued a statement describing its missile as infallible. 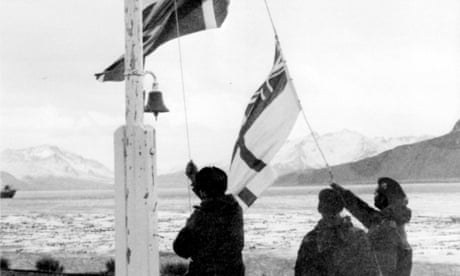 Fleet Street newspapers informed their readers about this “awesome, space-age weapon”, and described it as “a missile that couldn’t miss”. In fact, it appears that later in the Falklands war, some were successfully deflected with chaff.

The fire on board the Sheffield burned for two days. Six days after the attack, according to the official account, the ship sank while being towed. The Guardian has learned that it may have been scuttled. Only one body was recovered from the vessel.

Reporting in July 1982 to the navy’s commander-in-chief, Adm John Fieldhouse, the board of inquiry said it had concluded that the Sheffield’s on-watch principal warfare officer in the ops room had been negligent for failing to react in line with standard doctrine and training.

The board also found the anti-air warfare officer had been negligent because his “lengthy absence” from the ops room meant an important air-defence facility was not manned. The report notes that 12 minutes after impact, this officer was still insisting the ship had not been struck by a missile.

However, Fieldhouse ruled that the two officers would not face any sanction. In September 1982 he informed the MoD – in a letter that has also been declassified – that although both men had “prima facie demonstrated negligence”, they would not face courts martial, disciplinary action or any form of formal administrative proceedings.

Instead, Fieldhouse decided, he or one of his staff officers would speak to each officer, to “ensure that each fully understands the situation”. The Guardian understands that one was subsequently promoted, reaching the rank of captain, and served in the Royal Navy for a further 20 years.

Clive Ponting, then a senior civil servant in the MoD, said the loss of the Sheffield was too great a catastrophe for the full facts to be made public. “Most people were clear that there wasn’t going to be public blame for mistakes that had been made,” Ponting said.

Ponting was arrested in 1984 after he exposed another of the war’s secrets: that the Argentinian cruiser General Belgrano had been sailing away from the Falkland Islands when it was sunk by a Royal Navy submarine, resulting in the loss of 323 lives, and that ministers had misled parliament and the public about the episode. He was charged under the Official Secrets Act, but acquitted by an Old Bailey jury.

Adm Sandy Woodward, who commanded the Royal Navy taskforce that had been sent to the Falkland Islands, noted in his book about the campaign that when the Sheffield had been attacked there had been “some kind of gap in her ops room and no action was taken”. 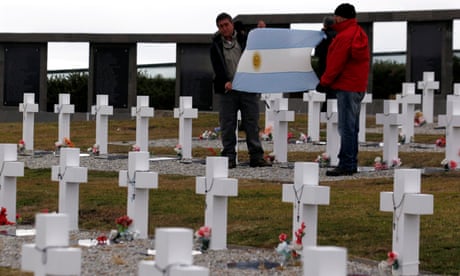 Woodward added that Fieldhouse had decided there should be no courts martial, “to avoid, he told me, the more doubtful cases creating the wrong atmosphere in the press and souring the general euphoria”.

Even two months after the attack, the board of inquiry was uncertain whether the Exocet’s warhead had detonated. Although crew members were convinced it had detonated, the board’s five members eventually concluded that it had not, and reported that the fire had been caused by the missile’s propellant, only 40% of which had been used during its flight. A fresh MoD reassessment made public in 2015 concluded that the warhead had exploded.

However, the Guardian has heard claims that the MoD had previously developed an electronic countermeasure that could switch off the Exocet’s fusing mechanism once the missile’s radar locked on to a warship. This would explain a failure to detonate, but would have required the installation of a signal-receiving mechanism while the missiles were under construction at Aérospatiale’s factory in Toulouse.

The officers and crew of the Sheffield were always aware there had been serious errors and failings before the sinking of the ship. In 2001, facing accusations of a cover-up, the MoD issued a statement confirming that the anti-air warfare officer had not been in the ops room before the attack warning, but insisted this was because he was not required and was “attending duties elsewhere”.

Five years later, after a campaign by ex-service personnel, the MoD released the heavily redacted summary of the board’s report.

The full and unredacted report was cleared for release in 2012, but the MoD delayed its declassification until now.