Grenfell Tower: Man who falsely claimed he survived fire jailed for £96k fraud & The 12 other fraudsters who took advantage of Grenfell 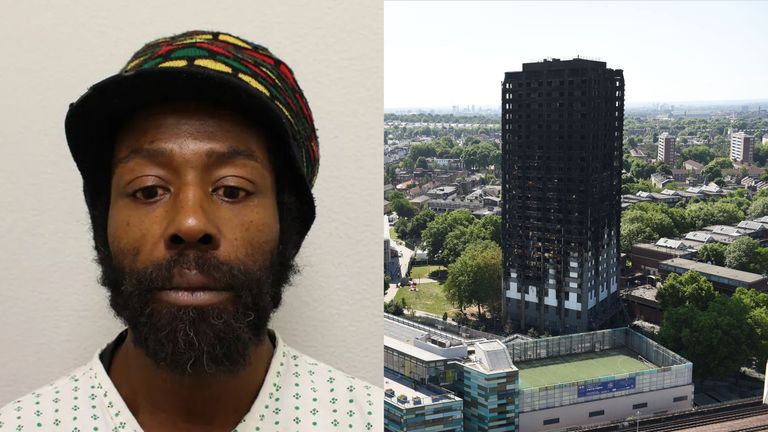 Alvin Thompson, 51, was jailed for two fraud offences that cost £95,706 after falsely claiming he had survived the Grenfell Tower fire.

He was sentenced to five years and six months for the first count and four years for the second count, to be served concurrently.

Thompson claimed to have been sleeping on the stairwell on the fifth floor and helped people escape, allegedly stepping over bodies as they got out.

As a result of his false claims, Thompson received hotel accommodation, financial assistance and he was allocated permanent housing in March 2018 after living in hostels for eight months.

The 12 other fraudsters who took advantage of Grenfell

People around the world donated money and goods to help the victims of the Grenfell Tower fire.

There were many survivors who were left homeless and bereaved by the tragedy that killed 72 people in June 2017.

But following the sentencing of Alvin Thompson on Wednesday, who was jailed after falsely claiming he had survived the fire, Sky News looks back on other fraudsters who took advantage of Grenfell.

Derrick Peters was convicted and jailed for six years in August 2018.

He had committed a burglary but had initially avoided jail by telling the judge he had lost everything in the Grenfell fire.

The 58-year-old had also lied to Kensington and Chelsea council, claiming he had been living with a friend at the tower who had died in the blaze, although he had not been there himself on the night of the fire.

As a result he was put up at Kensington’s Park Grand Hotel between the end of June and January this year at a cost of more than £40,000. It was during that time that he committed the burglary.

He was found out when officials became suspicious – the flat number he claimed to have been staying in did not exist, he was not on any CCTV coming or going from the building and the daughter of his friend said Peters had never stayed with them.

Yonatan Eyob was a drug dealer who claimed to have been staying with a friend in flat 182 in Grenfell Tower on the night of the fire. The flat was home to five members of the El-Wahabi family, all of whom died.

He had the use of a white convertible Mercedes, complained about the hotel’s wifi signal and also asked for more money, saying he found it hard to eat the hotel’s food.

Jenny McDonagh, 39, took £62,000 from a fund for Grenfell victims while she worked as a finance manager at Kensington and Chelsea Council.

McDonagh was jailed for five and a half years after pleading guilty to fraud, theft and concealing criminal property.

She had used the money for holidays to Dubai and Los Angeles, expensive meals, shopping and around half of the money was spent on gambling.

McDonagh, of southeast London, took the money over a 10-month period.

Anh Nhu Nguyen, 53, was jailed for 21 months after getting more than £10,000 from the local council and charities by pretending his family had died in Grenfell Tower on the night of the fire.

Nguyen, from Beckenham, said his wife and son had died and he was even pictured shaking hands with the Prince of Wales as the royal met survivors in the days after the tragedy.

He even told Sky News about the “shock” of “seeing dead bodies” as he left the apartment block.

Elaine Douglas and Tommy Brooks claimed they had lived on the tower’s 19th floor but had been staying with friends elsewhere on the night of the fire.

The Jamaican nationals were illegally in the UK.

Douglas was housed in the Radisson Blu in Kensington for 276 nights at a cost of just over £55,000 to the council and, after complaining about the food in the hotel, she was given a pre-paid credit card, running up charges of more than £11,000.

She was also handed a pre-paid Oyster card so she could travel free of charge.

Brooks also started at the Radisson Blu before being moved to another hotel – 243 nights that cost the Royal Borough of Kensington and Chelsea more than £49,000. He racked up charges of £9,000 on a pre-paid credit card and was also given an Oyster card.

Mohammed Syed Rinku was jailed for 18 months after he claimed to have lived in Grenfell Tower while in a relationship with another occupant.

The illegal immigrant also applied for leave to remain in the UK under the Grenfell Survivors Immigration Policy.

He admitted to fraudulently claiming £5,070.26. He had never lived in the tower.

Abdelkarim Rekaya was jailed for four and a half years after pleading guilty to fraud by false representation and obtaining leave to remain by deception.

The 28-year-old had claimed to be homeless but living in the tower on the night of the fire.

In December he was moved to a home where he was able to live free of rent and bills until July last year, but he was later found to have been lying.

Koffi Kouakou, 53, was jailed for four years after claiming he had lived in the tower and had been in a relationship with the flat’s other occupant, who died in the fire.

He was given two months in a hotel before moving into a council-funded flat with the cost coming out at more than £30,000.

But police found that he had not been in a relationship with the woman and had not lived in the tower.

Antonio Gouveia, 33, was jailed for more than three years after falsely claiming to have lived with a woman in a flat on the tower’s seventh floor.

When the real resident of the flat tried to collect some of the things donated to help victims, she was told a man from her flat had already collected the donated laptop. A similar thing happened when she asked for financial assistance but she flagged up the issue to the council and the police were called.

The woman told the police that nobody had lived in the flat for 20 years apart from her, her partner and her daughter.

He told police he had lied because he was homeless and wanted housing.

Joyce Msokeri, from Sutton in south London, was jailed for four and a half years after fraudulently obtaining more than £10,000.

She said she had lost her home and her husband in the tower fire and was also given accommodation at the Hilton, clothing and food.

But the 46-year-old was caught when it was proved her mobile phone had never been used near the Grenfell site and that the morning after the fire she had spent an hour on the phone to Sky complaining about being charged an extra £1.50 on an unpaid bill.

Also, she did not have a husband, and had actually been single and living miles away at the time.

Mohammad Gamoota was jailed for 18 months after claiming his father had died in the blaze.

Gamoota, 31, said he had been living with his dad in the tower and gave the name of a real victim as being his father. He had got the elderly man’s name from a newspaper article about the fire victims.

Sharife Elouahabi was jailed for six years for falsely claiming that his uncle and cousins had died in the blaze.

The 38-year-old from Kensington, west London, claimed to be a member of the El-Wahabi family, five of whom died in the tragedy, but he had no connection to them at all.

Elouahabi received around £103,000 in accommodation, travel costs and maintenance.

When police checked CCTV they found no sign of him ever entering the building and could not place his mobile phone signal in the area.