What is the British Military DOING?… 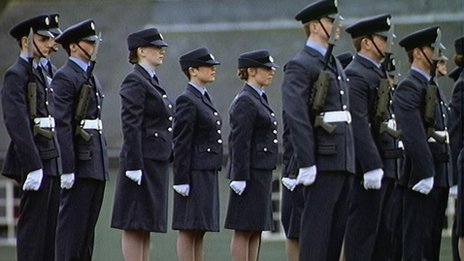 Three female RAF recruits are to be paid compensation for injuries reportedly suffered while marching alongside male colleagues.

They claimed parading alongside taller male recruits caused them to over-stride and develop spinal and pelvic injuries.

The MoD said the RAF had now reviewed its recruit training practices to reduce the risk.

The women told the Mail on Sunday they had extended their strides to 30in (76cm) over several weeks while undergoing basic training.

RAF official policy now states female recruits should not be expected to extend the length of their strides beyond 27in (69cm).

The paper reported that lawyers for one of the recruits claimed the Ministry of Defence (MoD) had accused the three of exaggerating their symptoms during the five-year legal battle.

As well as marching in step with male colleagues at RAF Halton, in Buckinghamshire, the recruits claimed that carrying the same heavy packs as males had also contributed to their injuries, the paper reported.

Claimant Tracie Davies, from Odiham in Hampshire, started basic training with the RAF in January 2006 at the age of 22.

She told the Mail on Sunday: “The guys were over 6ft tall so I was over-striding to march in step with them.

“When I started getting pains in my groin I was told to march through it, even when I was carrying a heavy pack which was almost the size of me.

“I trusted the medics to know better than me so I carried on marching.”

She said she had suffered four pelvic fractures and was medically discharged in 2008.

The MoD confirmed that a settlement was agreed with the former recruits on 7 August after they suffered stress fracture injuries.

In a statement, a spokeswoman said: “When compensation claims are submitted, they are considered on the basis of whether or not the Ministry of Defence has a legal liability to pay compensation.

“Where there is a legal liability to pay compensation we do so.

“The RAF takes the welfare of its recruits very seriously and has reviewed its recruit training practices to mitigate against this risk.”

She said the amount of compensation is determined by common-law principles, taking into account an individual’s pain and suffering, the degree of injury, property losses, past and future financial losses and the level of care required.

She said: “The MoD ensures that personnel injured as a result of service get the financial and welfare support they need and deserve.

“The Armed Forces Compensation Scheme provides a tax-free lump sum payment and we have actively sought to raise awareness among service personnel of their right to apply for financial recompense.”

The Mail on Sunday said it understood that at least five cases of female RAF recruits bringing claims against the MoD due to pelvic injuries suffered on marches were being litigated.